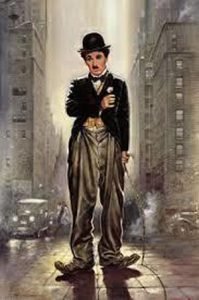 The greatest pen that ever wrote would balk
if asked to write of someone who was lame
and then received the gift to somehow walk,
or if the mute learned speech, so much the same.

But no, for one born blind to then have sight?
It is too much to ask, the very thought…
to see a mother’s face, or lily’s white,
to look around and see what God hath wrought!

With excess cash, she bought a flower shop
prosperity had come to her to stay,
and every bud, a symphony of sight,
an angel chorus sang with each bouquet.

But still, among the sights she longed to see,
the man who bought her sight was never there.
She dreamed someday he would return to her
but could not fathom when he would, or where.

Each time a well-dressed man entered her shop,
she sought his eyes. Could this one be the one?
Was this her benefactor, lover, friend?
She searched in vain through seas of eyes; found none.

He dragged himself through streets he used to know,
he’d lost his sense of self-respect and pride,
for prison takes a toll deeper than time,
the good things in himself, he’d lost inside.

No longer wearing rags, the threads he wore
unsuited for a task to wipe or wear.
One shining thought alone he still held dear,
to see his lady and her fate, but where?

She never knew his face, so he was safe,
knew he could stay in anonymity.
But needed to know what became of her,
just one glimpse of her eyes, and he would flee.

Her former flat was empty, dark and cold.
The corner where she’d peddled, also bare.
Perhaps she learned he really was a bum,
perhaps she found her sight, and didn’t care.

A single iris blossom in the trash
forced him to pause  a moment where he stood
recalling such a blossom long ago.
He’d bend time’s arms to point there if he could.

He stooped to pick it up, though bruised and brown,
so tenderly, as though it were a babe.
He held it gently up to his lapel
recalling hope-filled promises he’d made.

He heard girls’ laughter, as if from afar.
His eyes turned up, and through a storefront glass,
but no, he must be dreaming, maybe dead?
the face he saw looked like his long-lost lass!

The beggar that she saw before her store
was picking through the garbage on the street,
but when he saw her, stood straight up and stared.
(Perhaps he thought she’d give him food to eat?)

But then he gazed at her so hard, so long
she thought him  rude, and then she coarsely laughed.
“Perhaps I’ve made a conquest, do you think?”
she saw he held a blossom, brown and smashed.

And then she was ashamed for what she’d said.
Acquainted as she was with want and need,
it was not right, dismissing poverty
since she herself had only just been freed.

She took a coin out of the register
and plucked a fresh new bloom and went outside
to offer him a penny and a smile
and substitute his iris, brown and dried.

He turned to run.  No, she must never know!
She grabbed his coat, and suddenly hands met.
She softly touched his arm, and then his face.
The hands that once were blind cannot forget.

Elation and pure horror never since
have mingled so completely, through and through.
And hungry eyes at last could see it all.
She simply softly said to him “It’s you!”

This world remains a dark and lonely place,
and people choose to cling to their disguise.
But love unmasks the willing, wanting face,
revealing that we all have hungry eyes.