The Double Sonnet can be one of three sonnet forms.
◊ The Double Sonnet is 1 poem made up of 2 sonnets. Given this description, the poem could employ a Sicilian Sonnet and a Shakespearean Sonnet or whatever variable combination of sonnets the poet chooses.
◊ The Double Sonnet is a poem in which the sonnet rhyme scheme is doubled. This description would mean that the poem is made up of 2 sonnets of the same variation and rhyme scheme, such as 2 Wordsworthsonnets or 2 Terza Rima sonnets.
◊ The Double Sonnet is a poem that doubles the sonnet octave and then doubles the sonnet sestet. This seems to be more like one sonnet doubled in size than 2 individual sonnets stuck together by proximity and theme. In this scenario there would be only one turn or pivot which I assume would occur near the end of the 2nd octave or during the 1st sestet.

Pasted from http://www.poetrymagnumopus.com/index.php?showtopic=1058#double
My thanks to Judi Van Gorder for years of work on this fine PMO resource.

I ran a contest on Allpoetry.com to obtain samples of each type, and here
they are. 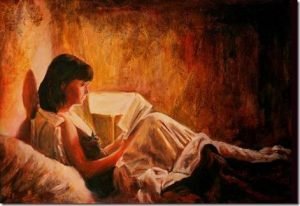 My love is flat, and words its pages fill.
I bring it out while climbing into bed,
And open up its covers with a thrill,
To let its great adventures crowd my head.

For after my mundane concerns have fled
I turn a page, and open up the gate.
New cities, countries, worlds are mine instead
Of bosses, boring meetings, and debate.

And even in the daytime, ‘neath the weight
Of dreary office work and dull routine
I’m eager, for I know my love awaits
To carry me away to some new scene.

A day without my love I can’t endure;
Its tales of other lives have such allure.

When I must fly, to make my luggage light
I bring the love whose face glows in the night.
In my hotel it carries me away
With tales of danger, daring, and delight.

Once far from home, when meetings filled my day;
All done! I sought my love without delay.
But when I pressed the button on the side
What tragedy!  There was no bright display.

It wouldn’t charge, no matter what I tried
I must admit I very nearly cried.
I urgently dumped purse and bag and case,
And then a battered paperback I spied.

There are some things a tablet can’t replace.
I smiled, and held the book up to my face.

Beyond the Pale
By L. Allen Bacon, writing as Allen a Dale

I try to include a list of vocabulary and phrases just because some things get lost without an explanation. I am also a bit of a nut about wanting to know the etymology of words and phrases. Google is a wonderful thing!

Vocabulary:
bourgeoisie [(boor-zhwah- zee)] (For the purposes of this poem) In general, the middle class. Applied to the Middle Ages, it refers to townspeople, who were neither nobles nor peasants.
Beyond the Pale: “The everyday use of the word ‘pale’ is as an adjective meaning whitish and light in colour (used to that effect by Procol Harum and in countless paint adverts). This ‘pale’ is the noun meaning ‘a stake or pointed piece of wood’, a meaning now virtually obsolete except as used in this phrase, but still in use in the associated words ‘paling’ (as in paling fence) and ‘impale’ (as in Dracula movies).

The paling fence is significant as the term ‘pale’ came to mean the area enclosed by such a fence and later just figuratively ‘the area that is enclosed and safe’. So to be ‘beyond the pale’ was to be outside the area accepted as ‘home’.”

I always ride along the survey roads
that neatly notches backwood’s horizon.
I’ll follow trails where moccasins would run
on down to peaceful riverside abodes.
It’s there, the raucous magpie’s call explodes
and laughing children’s echoes blot the sun.
Where nations died, a crimson tribe’s undone.
The scattered arrowheads show episodes
of feast and famine before life erodes.
The signs are shattered skulls and bones that stun
until one turns away from less than none.
No fireside stories told in dancer codes
and drums have died to thunderstorm downloads.
My eyes are scratched by dusty devil’s fun
but blackened tracks of tears will dry to dun.
Before I go, I ponder woeful odes.

My horse is restless, time of day grows short.
A father’s way becomes the son’s pastime.
My daily crimes are plentiful it’s true.
I kill my share of game for lack of sport.
Today, my taste is dryly caked with grime.
A bitterroot has burst where lilies grew.
The river’s bank has broken, I abort
my plans to ride across to lowly climb.
As dusk descends, my horse is urged anew
to take me up the hill, our last resort.
The ridge is reached, the past has lost its prime.
Who judges me will also judge you too