By Lawrence Eberhart | December 22, 2012 - 3:39 pm |June 6, 2020 All, Childhood, Joy, seasons
The Mason Sonnet is an invented sonnet form created by American poet Madeline Mason in 1953. It is the rhyme scheme that sets this sonnet apart from others. This was found in the Study and Writing of Poetry; American Women Poets Discuss, 1983 and has been used in workshops
throughout the US
* an octave and a sestet.
* metered, iambic pentameter.
* Rhyme pattern: abcabcbc dbadda
* composed with a pivot developed after the octave.
Example Poem:
Grow up Slowly        (Mason Sonnet)
I like to go to grammas’ after school.
I show her what I learned today then play,
or learn a lot of stuff not in a book.
She showed me how to milk a cow. That’s cool.
She showed me on the internet today.
But best of all she lets me help her cook!
We made gingerbread cookies; Grandpa took
a lot so I think they turned out okay.
Don’t know what I’ll  be when my growing’s done,
A cook? A fireman? It’s too hard to say.
If you think I change my mind a lot, you’ll
be right. My mom says choosing’s half the fun.
“Take time to be a  kid and play and run.”
Right now that’s my grandparent’s golden rule.
© Lawrencealot – December 21, 2012
Visual Template: 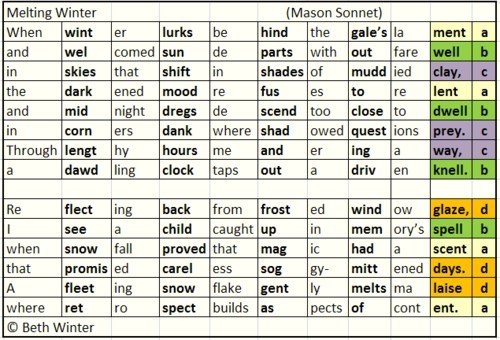