The Solihull sonnet form was invented by Barry Hopkins, a Silhillian*, writing on Allpoetry as Black Narcissus , and composed as a double sonnet. Which I have shown below.

The sonnet may be written in either iambic pentameter or tetrameter.
A volta is optional,
(Which makes for a easy story telling sonnet.)
but if it occurs shall occur at line 13.
Rhyme Scheme ababababababcc.
(Differs from the Indonesian Sonnet, only by the final couplet.)

Yes, It Has Got Summer’s Day In It, But It’s Not What You Think.

Alas it was a day of bland cliché
where every line was naught but platitude;
my inspiration – ‘ Fifty Shades of Grey ‘
was more like shaking hands with gratitude;
I searched for something bawdy and risqué,
lascivious with fifty shades of lewd,
yet I seemed more engrossed by peach soufflé,
had I become a straight-laced, priggish prude?
Where once my mind obsessed on lingerie
my only contemplation was of food;
downcast I strolled into a strange cafe
to ponder this decorous attitude.
The waitress had come-hither, deep blue eyes,
but I just stared at all the apple pies.

“ What bothers you, this wondrous summer’s day? “
She asked and said “ I’m sorry to intrude.”
I spoke to her of my complete dismay
as on my apple pie I slowly chewed.
The more we talked the more I begged her stay
and sensed a subtle changing to my mood,
it seems we talked the afternoon away
by evening I was such a horny dude.
A man has urges that he must obey
and those cannot be baked or barbecued,
all thought of food was now in disarray
would she be as delicious in the nude?
That night was one of whispering and sighs,
the sort a poet must immortalize.

* Solihull is one of the most prosperous towns in the English Midlands. In November 2013, the uSwitch Quality of Life Index named Solihull the “best place to live” in the United Kingdom.  Residents of Solihull and those born in the town are referred to as Silhillians.  The motto of Solihull is Urbs in Rure (Town in Country).
Pasted from http://en.wikipedia.org/wiki/Solihull

I wandered everywhere when I was young,
at first on foot around the countryside,
then later I hitch-hiked or rode among
the hobos who preferred a freight to ride.
Throughout the western states my hat was hung
in restaurants where my chores for food were plied
and in resort campgrounds where songs were sung.
I slept on beaches cleaned up by the tide,
and shared the food that other folks had brung;
the tales I told them kept them satisfied.
I may have spoke at times with fork’ed tongue
embellished tales – I never outright lied.
I later ventured East, but came back West
to settle in the country I liked best.

Skeeter Sonnet.
A gadget sonnet form created by Barry Hopkins, writing on Allpoetry as Black_Narcissus, and given the name Skeeter Sonnet by Lawrencealot.

It is a quatrazain.
It is metrical consisting two metric feet a dactyl followed by a trochee.
All even lines except the last, are catalectic.
It is rhymed like an Shakespearean Sonnet
Rhyme pattern: ababcdcdefefgg

This is his first such poem.

A Stunted Sonnet. ( Or Shakespeare Sawn In Half – Nearly )

It’s what you name it
I reckon, sir.
If you should claim it
then it’s your cur.
Well known’s its meter
rhyme pattern too,
small like a skeeter
as used by you.
Not as expected
Ii doesn’t hurt,
even connected
to a pervert.
Thus I’m concluding
we’ll be colluding.

I propose that this bimeter sonnet be named the Skeeter Sonnet. 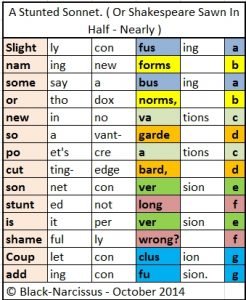 This is a gadget sonnet form invented by Barry Hopkins, aka Black_Narcissus of Allpoetry.com.

These are the specifications I am sure of for the Folded Sonnet:
It is a 12 line sonnet. (Providing a form that now gives us a sonnet of every line-length between 10 and 17)
Rhyme pattern: aabbccddeeff
Metric: Written in iambic heptameter.
Volta required at L9.

I would suggest that any rhyme scheme would be acceptable.

Jejunity’s absent from every verse that poet pens
Immunity from boredom is a treat his work portends.
Self-deprecating humor laced with frequent badinage
O’er shadows grand intelligence he tries to camouflage.
He teaches while he plays with words, although that’s not his aim;
I’m moved to emulate his style and jump into the game.
His rhymes are often fresh and new with phrases seldom seen.
If I could visit England, I’d see him before the Queen.
But though I write in rooms that simply don’t seem to exist
I’m never there when he is- so my searching will persist.
I’ll know that I’ve achieved one goal when I read someone’s quote:
“That verse I saw by Larry looks like something Barry wrote.”