The Brisbane Sonnet consists of two sestets and a couplet. The original sestet was based on the Hymnal Octave form which has a rhyme scheme of a.b.c.b.a.b.c.b. Two of the b lines are removed and leave a rhyme scheme of a.b.c.a.b.c. by adding another similar sestet d.e.f.d.e.f. and a couplet, g.g., this sonnet form was born.
The Hymnal used an alternating meter Iambic Tetrameter followed by Iambic Trimeter. As the Australian dialect has its own natural meter which is a mixture of Iambic and Anapest the meter was set as just any Pentameter.
This sonnet form was created during a working visit to Brisbane during the floods after talking with some of the flood victims.

Tell Me of Your Anger in Whispers (Brisbane Sonnet)

Should you be moved to speak in anger dear
I ask that first you test your words alone.
If meaning’s very clear, then is it fair?
Unleashed, harsh words will travel like a spear,
If anger stems from blunder of my own
You know I’ll be contrite and seek repair.
Why not delay, so anger can abate?
Is it essential now that blame be found?
Attack invokes defense without much thought.
There’s nothing risked delaying words that grate.
With calmer words we’ll both seek common ground.
Use dulcet tones to reap the goal now sought.
My love, use whispers closely late tonight.
I love you, honey; I will make it right. 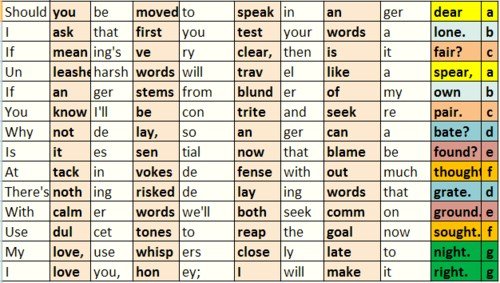