This is a form invented by Jose Rizal M. Reyes of the Philippines
Unique in  presentation as 2 quatrains + 2 Tercets
Generally Iambic Pentameter
Volta at line 9
Rhyme Scheme: abba cddc eff egg
Same rhyme pattern as Bowlesian Sonnet.
Example Poem:
Today’s Best     ( Canadian  Sonnet – Italian Structure )
The editor demands my very best
with ocean’s depth and pictures for one’s mind.
Let waterfalls of syllables combine
while melodies of sounds they manifest.
Just that and nothing less is all that’s asked.
The pen is poised and pauses while I think –
perhaps I scratch my beard and sip a drink,
before returning, determined, to my task.
Oh, hell! How often does one sit to write
a piece of crap to merely fill a page?
Real poets don’t do that in any age.
We never set out trying to be trite.
Our very best attempt are made in vain
When mind’s creative cogs get clogged again.
© Lawrencealot – December 5th, 2012
Visual Template:

This is a form invented by Jose Rizal M. Reyes of the Philippines
2 quatrain + couplet + quatrain
Pentamer or Hexamter
Volta at line 9
Rhyme Scheme: abba cddc ee fggf
Example Poem:
Squawk Talk                        (French Canadian Sonnet)
“I need to have a word with you,” the seagull said.
“You armed with notepad, looking pensively astute.”
“Yes, muse,” I mumbled, “go ahead,  you’re being cute.”
The seagull squawked and startled me then turned his head.
“You dolt on doves and rave about the ravens’ clout,
you’re high on nightingales, and hummingbirds, and owls.
You write of raptors’ might as they kill birds and fowls
Yet we’re ignored almost. Explain what that’s about.”
“Opportunistic, smart, existing everywhere
with precocial chicks  and flight, why do you care?
Like man you find your food almost in anyplace,
and flock with mobbing to dissuade aggressive foes.
You’re species’ success seems to far outweigh your woes.
and by the way we do admire your flying grace.
© Lawrencealot – December 5th, 2012
Visual Template:

This a form of the super sonnet class invented by
Jose Rizal M. Reyes on June 9, 2009 This is a triple tailed sonnet
abba bccb cddc dd / dee dff dgg
3 quatrains + couplet + 3 tercets
natural place for the volta is line 13, but poet may choose.
Example poem:
Envy then Punish the Rich      (Germanic Caudated Sonnet)
In every age some chosen few have ruled
despite the form of government in place.
Laws are the tools that often bring disgrace
Eventually when power’s overruled.
Entrusted senators, to win their race
now tell the public what it wants to hear.
Views shared with some are hushed, but its clear
your wants  will yield to those more highly placed.
Rich men can fund campaigns and make appear
Innumerable chances to obtain
considerable wealth with little pain.
Handshake contracts let fairness disappear.
`
Indeed we viewed the scoundrels with disdain
no doubt, but set our course to our own gain.
Occupy Wall street  meant that one would train
until they could perform those jobs that paid
real bucks for successful decisions made.
Some joined those rich, and walked in their terrain
and moved their family’s fortunes up a rung,
denouncing whining as song to be sung.
Alas our masses want the rich contained;
government must now give punishment to those
employers rising in the path they chose.
*
© Lawrencealot December 1, 2012
It happens that this poem is also an acrostic sonnet.
Visual template:

Hope for the Winners      (Trinidad Sonnet)

The race is being run without a doubt.
The rules are changing yet corruption rules.
In every project gov’mint talks about.

Yet private enterprise and science still
will surge ahead with heat that seldom cools,
increasing benefits that awe and thrill.

The gifts we’ll see ahead will be profound.
Will joys and health alone prevent  a rage
against the plutocratic greed that’s found?

A radical religion may bring hell
to Earth.  A clash, if hatred comes of age
could cost a billion lives before we’re well.

The race is being run without a doubt.
The gifts we’ll see ahead will be profound. 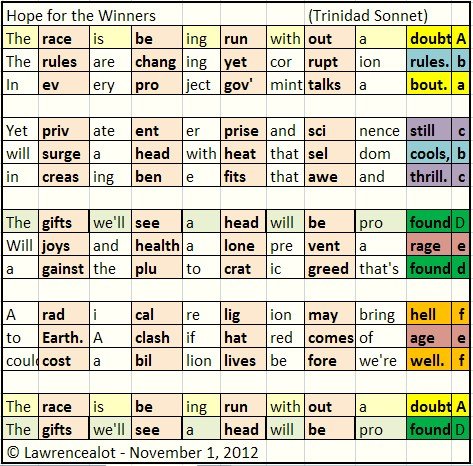 The frying pan so old and black awaits
ingredients arrayed on several plates.
The bottom boasts a pool of olive oil
One plate has bit-sized chunks of beef on hold;
already seasoned, so I have been told.

Sliced peppers on the next plate can be seen,
It’s a riot: yellow, orange, red, and green!
The white rice in a pot begins to boil
as beef and onion pieces start to fry.
The savory aroma brings a sigh.

When peppers are  then added to the mix
and momma stirs the pan too big to lift
the colors and the odors are a gift
that no one better than my mom can fix. 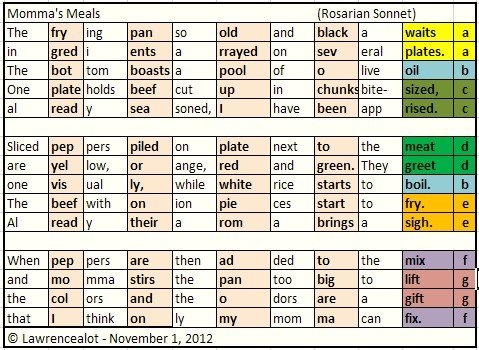 I wanted so to be a Hylonome’
the half-woman half horse said once to rome
thru myths, inscribed in ancient dusty tome.
“No, shan’t display your breasts away from home.”

“But Dad, my tits are finer than my face.
You promised me I’d win a premier place.”

“You shall, you have provided me a clue.
Now please go way, I’ll see what I can do.”
His art with leather shined with stitches true,
and art was wearable when  dad was through.

Her boobs were covered, crushed and that was sad,
but she her face was hidden, that’s not bad.
She worn the finest horse-head to be had
and winning first place surely made her glad. 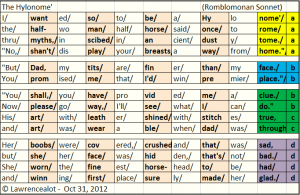 Now Jose’ chose to honor previous Pope,
by naming sonnet form with which to cope
when writing of some warm religious hope.
Oh, I expect you might expand its scope.

A pro-abortion poem ought not use
this form.  There are so many more to choose.
But satirists we know like to bemuse,
abuse, confuse and thereby, yes amuse.

The mono-rhyme will lend itself to play
with poems that are light and mainly gay.

Now since the Pope spread happiness and light,
this form can help you do so when you write.
Composed in tetrameter you just might
Deliver verse written to recite.

You cannot name this sonnet in Trochaic,
nor Iambic – either for heaven’s sake?
Four quatrains, each one mono-rhymed will make
this writing seem an easy piece of cake.

While Philippine will scan well on its own
and Stanza fits, like Sonnet, when alone
together three are far from metric prone.
I didn’t need to, I just like to moan.

But now the  iambs have been established well,
I have but one more factoid I must tell:
Using a tetrameter would be swell.
In monotetra rhyme it does excel.

So now we’ve done it, finally we’re all through.
I walked you through it  – now you write one too. 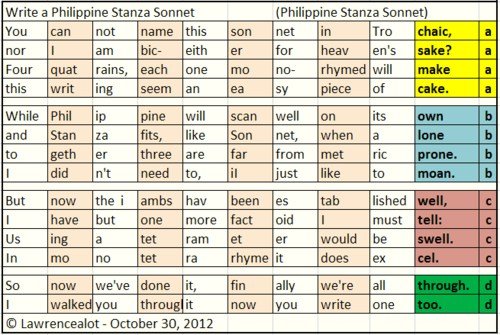 The do-nut shop was open every day
we gathered there so we could have our say.
The “regulars” would leave their cup to stay
on hook-board: their own coffee cup buffet.

The hunters met the councilmen and cops,
and teachers met their students’ moms and pops.
The farmers spoke of watering their crops,
and sporting brags and bullshit never stops.

A newcomer just didn’t hold much sway
the coffee group was small-town thought per-se
The men would read, the women might crochet
until the conversation turned their way.

I learned more there than I did watching news
and found a balanced set of rural views. 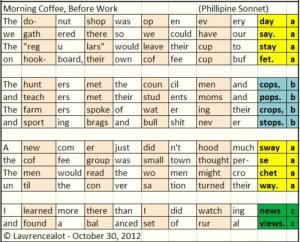 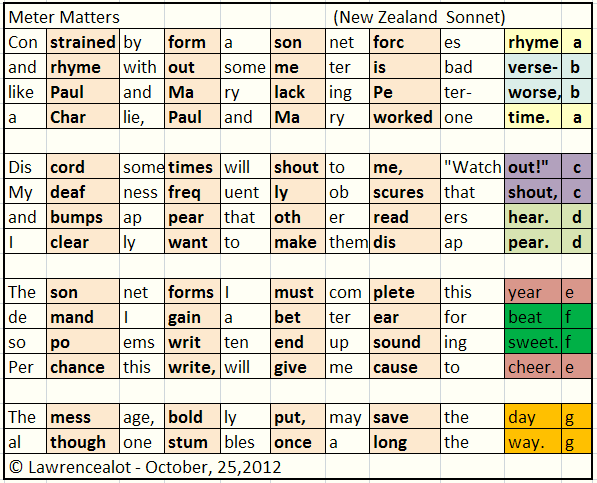