Although the sonnet began in Italy in the 13th century, Thomas Wyatt 1503-1542, was one of the first English poets to translate and utilize the form. He used thePetrarchan octave but introduced a rhyming couplet at the end of the sestet. His friend the Earl of Surrey also initiated more rhyme.

The Italian form was restricted to 5 rhymes. After Wyatt and Surrey the sonnet could have 7 rhymes. They also shifted the sonnet away from the slightly more intellectual and argumentative Petrarchan form, and gave new importance to the ending, declamatory couplet. This Wyatt/Surrey adaptation of the sonnet has not been officially named, at least I haven’t found an assigned designation yet. So for the sake of identification I call it the Wyatt/Surrey Sonnet.

The defining features of the Wyatt/Surrey sonnet are:
a quatorzain, written with a Petrarchan octave followed by an envelope quatrain ending with a rhyming couplet.
metric, primarily iambic pentameter.
the rhyme scheme is abbaabba cddc ee.
it is composed with the volta (non physical gap) or pivot (a shifting or tilting of the main line of thought) sometime after the 2nd quatrain.
distinguished by the declamatory couplet.

The Petrarchan form stood intellectually
rigid for two hundred years, then it stretched.
Now five rhymes seemed not quite enough, so fetched
a couple more, yawned then moved experientially
away from arguments intolerably
constricted, to a poetry that etched
the notions, bards awaited, hands out-stretched-
to write a lighter sonnet, more flexibly.

For English writing folks this ushered in
the beginning of what has never stopped.
Traditionalists chins had surely dropped.
The morphing form was changing from within.

The purists arch their brows and speak disdain,
But sonnets have transformed and will again. 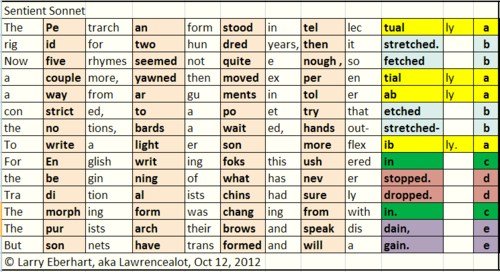