This form was invented by  Alberto J. Alvarez G. writing on Allpoetry as
MystiqueWizzard

It is Stanzaic with three qutrains and a couplet
It is Syllabic 6/6/7/7 6/6/7/7 6/6/7/7  7/7
It is Rhymed with a Refrain
Rhyme Pattern Aabb cccc Aa cc dd
The Volta starts on the third stanza with the same first line
of the first stanza and it must spin the story into the opposite direction.
The couplet concludes the story.

Her Name’s Rose, Watson      (Mystique’s Mini Sonnet)
When Watson studied art
the students sat apart
in half-circle seeing view
of object they should sketch true.
Today in still life’s place
sat a lass dressed in lace
and pink bows each in their place-
taunting smile upon her face.
When Watson studied art
he left Holmes at the start
but as working on a case
a deduction would take place.
One man’s work was titled “Rose”
and he sketched her without clothes.
© Lawrencealot – December 21, 2013
Visual Template

The gimmee’s joined the takers to bring forth hell
for Americans who can think.
Obama’s  fortunes swell.
My liberal friends who thinks his win was  swell
STILL blame Bush and are quite amazed,
that the stock market fell.
The country that was so exceptional
will placate, those with rotten smell
who in cold dogma dwell.
The path from low to middle-class destroyed
by policies aimed to compel
hurting those who excel.
I must change tack, and join the thong and yell
for more and take it- hastening death’s knell.
(c) Lawrencealot – November 2012
Visual Template

A Vietnamese Luc Bat Sonnet a (ab) b (bc) c (cd) d (de) e (ef) f (fg) g (ga) Luc Bat means six eight. The lines are alternating six and eight syllables. The sixth syllable of every line is a rhyme.  Every second (even numbered) line has two rhymes, on on the sixth syllable with the line before and one on the eighth syllable that rhymes with the line after.
Example Poem

Names at Work   (Luc Bat Sonnet)
I worked with Harry Balls
and sometimes took his calls in fact,
and handled them with tact.
‘Twas not always exactly fun,
but Shanda had begun
to ask to see the one so named,
innuendos untamed.
The girl was unashamed for sure.
Oh yes, I took the lure.
She broadcast such allure it seems
she’d fostered many dreams.
Her tight clothes stretched their seams I fear.
Her name was Shanda Lear
and she lit up our workplace stalls.

The Tet Zayin Sonnet was created by Amera M. Andersen.  Tet Zayin is the Hebrew number 16
A new Form with a strict structure it does not have to be iambic. It has 16 lines or four quatrains.
Rhyme Scheme: Aabb bbcc ccdd ddaA

Tell Me of Your Anger in Whispers (Tet Zayin Sonnet)

Persuade and convince with whispers in the night.
Speaking out in anger is apt to incite,
invoking defensive fight.  One should just wait,
make sure their words are clear; let anger abate.

An angry start assures a debate
Let’s solve the problem, not aggravate.
Harsh words once tossed out, fly like a spear.
You want concurrence, it would appear,

so wait and let anger disappear.
You convince me best when you are near.
If angered by blunder of my own
once I understand I will atone.

Between you and I no harsh words need be thrown
for granting joy to you, increases my own.
Tranquil ev’ning musings always turn out right.
Persuade and convince with whispers in the night.

French Sonnet or Rondel Prime is simply a Rondel with an second refrain added to the end of the poem. This verse form unlike most sonnets is usually syllabic. The sonnet was introduced to France in the 16th century by Clemont Marot (?-1544).

The defining features of the Rondel Prime or French Sonnet are:
• an octave made up of 2 quatrains followed by a sestet.
• isosyllabic, the classic French sonnet is written in Alexandrine lines but this sonnet form can also be found in 8 syllable lines or the lines can be an number of syllables as long as the measure is consistent throughout the poem. In English it is found written in iambic pentameter or Alexandrine lines.
• rhymed ABba abAB abbaAB, A and B being refrains.
• composed with 2 refrains. L1 is repeated in L7 and L13, L2 is repeated in L8 and L14.
• composed with a pivot or turn somewhere after L8.

When desolation grabs your heart and forces tears
Let nature speak, reminding you not all is known.
When you, so young were taken to the funeral biers
my faith was shattered; all beliefs and hopes were thrown

away.  I felt no comfort thinking heaven’s spheres
could somehow recompense for earthly love we’d grown.
When desolation grabs your heart and forces tears
Let nature speak reminding you not all is known.

I went to our lagoon, our waterfall appears
today to look like you, and hope renewed is sown
into my soul.  We lived and loved! This thought coheres.
That truly shines. Remember we are just on loan.
When desolation grabs your heart and forces tears
Let nature speak reminding you not all is known. 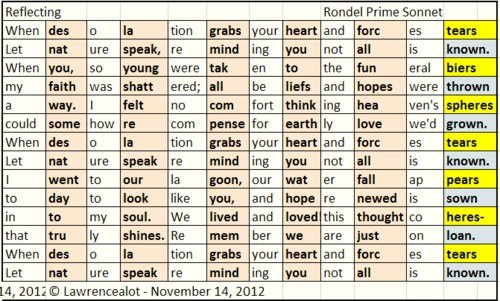