This form was invented by Allan R. Emery, aka Joe King on Allpoetry.
“The same as any Sonnet form as far as syllable count and end rhymes. The difference is that the rhyme is reversed for the first syllable (or syllables) of each line.
For example: An English sonnet is abab cdcd efef gg so in an English Princess Sonnet the beginning rhyme would be reversed: baba dcdc fefe gg (or hh, as you can use a new beginning rhyme for the couplet if you wish) where the couplet would begin and end with a rhyming syllable (or multiple syllables if you can pull it off).
An Italian sonnet would have an end rhyme of: abba abba cdecde, which would mean the start rhyme for an Italian Princess Sonnet would be baab baab edcedc (or baab baab efcefc). This will give the sonnet a cascading quality when read aloud. Often a rhyme will repeat as it ends one line and begins the next. Other times the two end rhymes of a quatrain will be next to one another as well, with one ending one line and the other beginning the next. Done with forethought, it will not be apparent that the sonnet is any different except to a very disciplined eye or ear. Yet, the rhythm and intonation that doubling the number of rhymes in a sonnet creates unquestionably makes the sonnet more like a song.
With this, An English Sonnet with a beginning rhyme is an English Princess Sonnet. An Italian Sonnet with a beginning rhyme becomes and Italian Princess Sonnet. Etc. If you wish, you can have the same rhyme begin and end each line, which would be a Mirrored English Princess Sonnet, etc.”
***** Notice that you can use 2, 3, or 4 syllable rhymes if you can pull them off. However, the most interesting would be the first syllable of the start rhyme and the last syllable of the end rhyme, hence: ‘Mental’ as a first rhyme would rhyme with ‘detriment’ as an end rhyme.****
Visual Template for English Version of Princess Sonnet,
with both front-rhyme options shown. 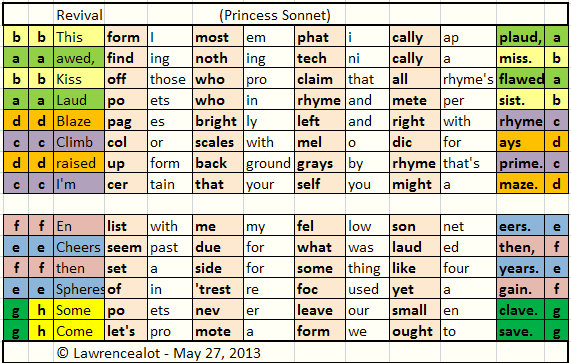 The Sephallian Reverse Sonnet
was invented in April, 2013 by poet Dennis Nguyen, aka Sephallia on Allpoetry.com.
The poem is generally presented as a quatrazain since it is intended to be read either from top to bottom, or from bottom up.  There is no prohibition to
presenting it in stanzas.
The DEFINING characteristic of this form is that when read in the normal fashion, the poem has a pessimistic tone, but when read from bottom to top, it becomes and optimistic poem.
The rhyme scheme is abcdeedcbaffa and may optionally be written as a refrain sonnet as A1bcdeedcbA2ffA2A1.
Meter and line-length are at the poet’s discretion.
Volta, which is recommended, but not demanded, can occur anywhere between L4 and L11. The poem can have one in each direction.
This is a challenging and rewarding form.
Example Poem
A Measure of Character(Sephiallan Reverse Sonnet)
What you are told in confidence
if you hold secret to your breast
reward will flow in unknown ways.
An urge to propagate a tale
to pique the interest of a friend
there can surely be no good end
when confidences you assail
a gentle whispered word betrays
when silence serves your honor best
Your revelation makes no sense
I’ll never trust my thoughts with you
if other’s secrets you will spew
If rumors gain some cognizance
From what you’re told in confidence .
© Lawrencealot – April 15, 2013
Visual  Template
The template below represents an Iambic tetrameter
sonnet, without  a refrain.  the shaded lines indicate
where the refrains would occur if one were chosen.

It’s just 7 Cyhydedd Fer couplets (rimed 8-syllable lines).  I don’t consider it a ‘sonnet’ myself, but Ceridwens Soul (my beloved Celtic forms teacher, now awol) did.  I suppose the ‘turn’ is anywhere you want it to be.

Tell Me of Your Anger in Whispers (Cyhydedd Fer Sonnet)

If you should speak in anger, dear,
first speak where only you can hear
If meaning’s clear, is message fair?
Are words intended to repair,
and will they guide toward common ground?
Is blame essential to be found?
The words can wait, while anger cools
and then converse when reason rules.
If I’ve done something that you hate,
advise me, but the words can wait.
You know I’ll move to make amends,
because I love you and we’re friends.
Use whispers closely late tonight.
And honey, I will make it right. 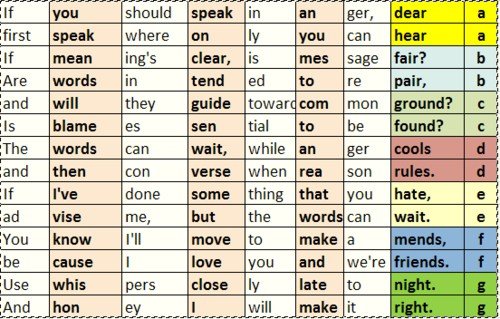