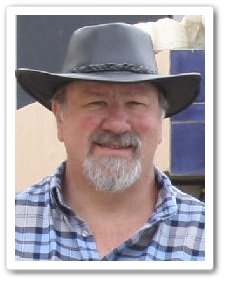 Mark Vincent was born and raised in Salt Lake City, Utah in a family with five siblings, and is now the father of six children. He refers to his wife, Laurie, as “a wonderful woman who has my been companion and guiding light for the past 31+ years.” The family lives in Northeastern Missouri, where Mark works as a manager of accounting and human resources in the manufacturing arena. Mark enjoys a diversity of hobbies, including cooking and collecting cribbage boards. As an avid reader whose library consists of over 1700 volumes (Are 135 cookbooks are too many?) he has compiled about 500 pages of favorite recipes. A pet rooster was the impetus for a writing avocation that would span a lifetime. Mark’s 6th grade poem about Herbie was published in the newspaper, and he continued to write throughout high school and college. Life and work, including missionary service in Austria, nudged poetry to the back burner for about 25 years. The need to express feelings over the birth, and shortly thereafter, death of Mark and Laurie’s youngest son brought forth a resurgence of writing that he has pursued in earnest since 1998.