The Seguidilla began as a popular dance song of Spain. The verse form was established and branched into variations by the 17th century. It has an alternating long short rhythm.

The Seguidilla is:
• stanzaic, written in any number of 2 part septets. (7 lines)
• syllabic, 7-5-7-5 : 5-7-5 per line. There is a slight pause between L4 and L5 suggesting L4 should be end-stopped.
• rhymed by assonance xaxabxb or xaxabab. x being unrhymed. True rhyme is generally not used.
• composed with a volta or change in thought between L4 and L5.
• sometimes serves as a conclusion for another verse.

The rapid click of slick heels
pounding on the boards,
play a staccato death knell
for life never mourned.
The red of his cape,
a splash of blood on the floor,
the matador’s fate. .

Pasted from http://www.poetrymagnumopus.com/index.php?showtopic=1014
My thanks to Judi Van Gorder for years of work on this fine PMO resource. 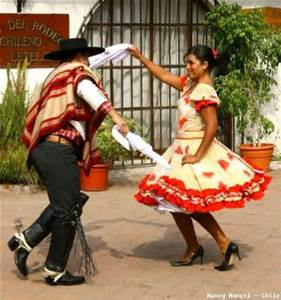 He with boots and spurs and cape,
She in flowing dress,
(Cumbia, perhaps), and heels.
Hat upon his head.
Both will kick and stamp
their feet and twirl kerchiefs while
caught up in the dance.

Spanish Poetry
Flamenca or Seguidilla Gitana carries a fast staccato rhythm. It is a variation of the Seguidilla.

The Flamenca is:
• stanzaic, can be written in any number of quintains.
• syllabic, 6-6-5-6-6 syllables per line to imitate the rapid click of the heels of a dancer.
• L2 and L5 assonate. (same vowel sounds)

Song of the Matador by Judi Van Gorder

In a dark cantina
a twelve string guitar keens
a feverish dirge,
tones of glory and fame,
the matador’s heartbeat.

Pasted from http://www.poetrymagnumopus.com/index.php?showtopic=1024#flamenca
My thanks to Judi Van Gorder for years of work on this fine PMO resource. 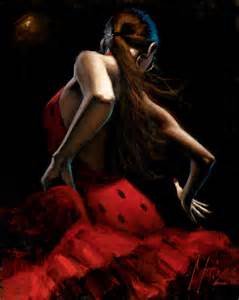 The guitarist speeds up
as faster castanets
amid a swirl of
ruffles and pokadots
clicks time with quickened feet.

This form was created by Mary Lou Healy, who write on Allpoetry.com as MLou.
It was patterned after the Italian song “Canto Della Terra” as expressed by Mary Lou in her own poem Chanson.

So true to the song is the form of her poem that she completed it using a tail, similar to a Bob and Wheel, which gives great freedom to other poets trying this form.

to the sun
the light, the light…
the sun, the sun,
the sun….

The Mlou Chanson is
A poem of 20 or 21 lines
Stanzaic: Two octaves plus a tail of four on five short lines
Metered: Alternating iambic dimeter and iambic trimeter for the octave
one or two stressed syllabls per line for the tail
Rhymed: xaxaxaxa xbxbxbxb for the octave, poet’s discretion for the tail
the octave rhymes are feminine.

We tend to sing
a song when we are happy
I tend to sing
alone because I’m crappy;
but none-the-less
the tunes I choose are snappy,
and frequently
I learned them from my pappy.

A flashmob meets
intending on performing
and often you
won’t notice while they’re forming
as into malls
or avenues they’re swarming
but when they start
you’ll find your heart is warming.

They’ll bring
a grin or smile
and sing, sing, sing
for just a while.

Visual template
(Note: Any rhyme scheme okay for the tail)

Pasted from http://www.poetrymagnumopus.com/index.php?showtopic=1882#baccresiez
My Thanks to Judi Van Gorder for the wonderful resource at PMO
My example poem
The Sailor and the Rose – 1980        (Duodora)
A round platform
occupied the center
of two acres of
polished hard wood floor.
As a young sailor
from a small town, I was already awed
by the hundreds of couples I suppose.
A round platform
became a stage for a
volunteer to sing
one song with the band.
I was never close
enough to see her. But we stopped dancing
and some (like me) cried as she sang “The Rose.”
© Lawrencealot – March 22, 2014
Visual Template