The Phillimore is a stanzaic form that moves from dimeter to pentameter and back again. It is named for John Swinnerton Phillimore (1873-1926) and patterned after his poem In a Meadow.

THIS is the place
Where far from the unholy populace
The daughter of Philosophy and Sleep
Her court doth keep,
Sweet Contemplation. To her service bound
Hover around
The little amiable summer airs,
Her courtiers.
The deep black soil
Makes mute her palace-floors with thick trefoil;
The grasses sagely nodding overhead
Curtain her bed;
And lest the feet of strangers overpass
Her walls of grass,
Gravely a little river goes his rounds
To beat the bounds.
—No bustling flood
To make a tumult in her neighbourhood,
But such a stream as knows to go and come
Discreetly dumb.
Therein are chambers tapestried with weeds
And screen’d with reeds;
For roof the waterlily-leaves serene
Spread tiles of green.
The sun’s large eye
Falls soberly upon me where I lie;
For delicate webs of immaterial haze
Refine his rays.
The air is full of music none knows what,
Or half-forgot;
The living echo of dead voices fills
The unseen hills.
Pasted from http://www.poetrymagnumopus.com/index.php?showtopic=668
My thanks to Judi Van Gorder for years of work on the fine PoetryMagnumOpus resource.
My example poem
With Love Possessed (The Pillimore)
I won’t repent.
I love your touch, your hair, your smile, your scent.
Anticipation takes my breath away
throughout the day.
A gesture made, a turning of your head,
with nothing said
provokes desire and happiness in me
for all to see!
If you ignite
desire by accident it’s quite alright
for fates have so aligned so both that lust
is right and just.
When I’m away, I agonize my dear,
that you’re not here.
Dispelled is every other form of strife
my darling wife.
© Lawrencealot – June 10, 2014
Visual template 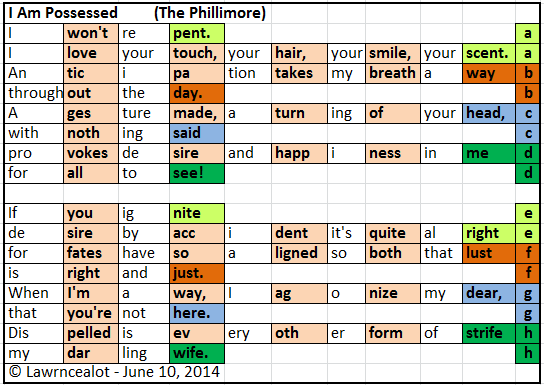 This form combining the rhyming pattern of an interrupted Petrachan Sonnet, with the breathing  cadence of common meter may have somewhere been used before, but it was definitely used and captured for us by Algernon Charles Swinburne in his “A Ballad of Death”.
I merely record it here and give it a name by which we can refer as we attempt to write such poems of our own.
It is stanzaic, consisting of any number of stanzas.
It is Syllabic: 10/10/6/10/10/10/6/10/10/10
It is Rhymed: abbacdecde
It is composed in iambic meter.
Example Poem
Cultural Patrimony     (Swinburne Decastitch)

When any culture deems it right to maul
and kill, inflicting pain, can you explain
away my great disdain?
Can you excuse the citizens and all
who legislate and rule who use as tool
the very worst impulses of man’s mind?
Against such things let’s rail!
We simply cannot fool ourselves- it’s cruel
to torment any species that we find.
With that in mind I’d like to tell this tale.
Young boys are often wooed by danger’s taunt
and while still teens endeavor to learn skills
to please the crowds with thrills.
‘Tis machismo alone that these boys flaunt,
and doubtlessly they want to earn the fame
accruing to the greatest in this “sport”
so fam’lies can be proud.
And many boys who play this dangerous game
will end up lame or have their life cut short
where death and torture’s commonly allowed.
In training some are killed or truly maimed.
and never set their feet into bull’s ring.
This is an honored thing!
But culture failing still persists unnamed,
where people think this cost perhaps is small;
and small it well may be when men have learned
compassion has no role.
If humankind is not herewith appalled
by acts dispensing pain where it’s unearned
each man accepts canker on his soul.
When man pits bull against a lion foe,
again to entertain and titillate,
we each should fee self-hate.
The gladiator games we must outgrow,
like burning ants and pulling off fly’s wings.
Each species may do harsh things to survive.
But evil has its cost.
When man accepts it’s right to torture things
which share our space and roam our earth alive,
compassion for all life will soon be lost.
© Lawrencealot – April 13, 2014
Visual Template

SONNETINA CINQUE
1. This form comprises of two cinquains.
2. There is no set meter or rhyme scheme, though iambic pentameter or tetrameter is common.
I HAVE SEEN THIS POSTULATED:
iambic tetrameter, rhyme scheme aabba OR abbaa
3. The first cinquain gives a statement or sets up a question.
The second cinquain provides a counterpoint to that statement or answers the question.
Example Poem
Maybe   (Sonnetina Cinque)
A gentleman must always know
A “maybe” spoken by his date
means actions planned “might” have to wait.
While “yes” is clear and signals ” go,
“Maybe” seems meaning “yes,but slow.”
She needs some help and time to think
which will be moot if you inspire
emotionally ignited fire.
A “maybe’s” changed with just a wink
and kisses helped along with drink.
© Lawrencealot – January 6, 2013
Visual template