Cuaderna Via (frame way) is a strict, syllabic stanzaic form that dominated most of the serious Spanish poetry for the 13th and 14th centuries until the 15th century when it was replaced by the more generic Art Major. The Cuaderna Via was the introduction of syllabic verse into Castillian poetry. It appears to have been originated by the Spanish clergy under French influence, hence the alternative names of mester de clerecía and nueva maestría. It is also known as alejandrino (14) since Spanish verse is often named for the number of syllables the lines contain, the alejandrino is now classified as a verse of Art Major.

One of the earliest known Spanish poets to utilize the form was Gonzalo de Berceo 1190-1264 and some of the best known Cuaderna Via’s were 14th century Juan Ruiz’s Libro d Buen Amor and Pedro López de Ayala’s autobiographic, Rimado de Palacio which was a satire of contemporary society.

This stanzaic form is known for its “rigidity of form: syllables are counted carefully” NPEOPP. In addition to the rigid meter, only true rhyme is allowed.

The Cuaderna Via is:
• stanzaic, written in any # of mono-rhymed quatrains.
• syllabic, 14 syllable lines divided into hemistiches of 7 syllables each, often broken by caesura. There is no wiggle room in syllable count.
• mono-rhymed. The rhyme must be true rhyme, no slant rhyme, assonance or consonance.
Rhyme scheme aaaa, bbbb etc. Apparently this is a form for purists.

First Day of Chemo by Judi Van Gorder
The morning chill waits for her, the cold arrived in the night,
she lies beneath her down quilt, still as a doe before flight.
The dreaded day has arrived, resolve mixed with fear holds tight.
She knows it’s what must be done and she swallows down her fright.

Pasted from http://www.poetrymagnumopus.com/index.php?showtopic=1022
My thanks to Judi Van Gorder for years of work on this fine PMO resource. 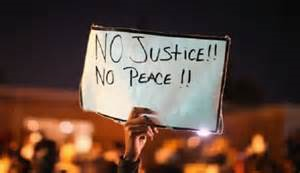 Black hands hold up signs that say (If) “No Justice!!” (then) “No Peace!! “
Ferguson’s a flash point now fueled by hatred of police.
Race baiters have their showcase, and they’re wanting no surcease.
No matter what the verdict – I know violence will increase.

Bigotry will flourish here, where race hatred’s been inbred.
I can’t tell where the truth lies, from what both have done and said.
Don’t take rage to city streets; stay with those you love instead,
for justice will not be served by assuring more are dead.