The Horatian Ode is the Latin descendant of the Aeolic ode, both of which were written to project a tranquil, contemplative tone meant for meditation. Both retain the purpose and formality of all odes, however the Latin descendant attributed to Horace in 20 BC, is better preserved.

The Horatian Ode is simply a stanzaic form in which all stanzas are structured in the same pattern at the discretion of the poet. (rhyme, meter, number of lines etc.), more technically it is “nonce stanzaic” or a “homostrophic” ode (ode made up of same structured stanzas created specifically for that poem).

Below are the first 2 stanzas of an Horatian Ode On Cromwell’s Return from Ireland by Andrew Marvel (1621-1678). It is written in quatrains made up of rhyming couplets, L1,L2 iambic tetrameter, L3,L4 iambic trimeter and indented. The poet could just as well have written the ode in cinquains in iambic pentameter with alternating rhyme and as long as all of the stanzas were the same, it too could be identified as an Horatian Ode.
The forward youth that would appear
Must now forsake his Muses dear,
——-Nor in the shadows sing
——-His numbers languishing:
‘Tis time to leave the books in dust
And oil th’ unusèd armor’s rust,
——-Removing from the wall
——-The corselet of the hall.
Or another example of a Horatian Ode is Ode on Solitude by Alexander Pope written in quatrains with alternating rhyme, L1,L2,L3 tetrameter, L4 dimeter.
Happy the man, whose wish and care
A few paternal acres bound,
Content to breathe his native air,
In his own ground.
Whose heards with milk, whose fields with bread,
Whose flocks supply him with attire,
Whose trees in summer yield him shade,
In winter fire.
Blest! who can unconcern’dly find
Hours, days, and years slide soft away,
In health of body, peace of mind,
Quiet by day,
Sound sleep by night; study and ease
Together mix’d; sweet recreation.
And innocence, which most does please,
With meditation.
Thus let me live, unseen, unknown;
Thus unlamented let me dye;
Steal from the world, and not a stone
Tell where I lye.
Pasted from http://www.poetrymagnumopus.com/index.php?showtopic=1120
My thanks to Judi Van Gorder for the wonderful PMO site. It is a wonderful resource. 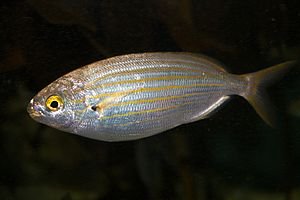 Oh praise the sea bream if you need
deliriants stronger than weed.
Hallucinogens of the sea
are tastier than toads to me.

The psychedelics grow in plants
that you don’t eat, (not that you can’t).
The dreamfish consumes, then he stores
enough to lift you several floors.

For days of dreams while wide awake
just eat this fish – forego mere steak.
Detail for us visions you see
in psychodelic poetry.

Visual template for this nonce form