Margeda is an invented verse form that is an exercise in trochaic meter with head and tail rhyme. It is said to be adaptable to the “elfin, the grotesque, the ironic and to nature poems”. (“nature poems” added at the end made me laugh) It is attributed to Edith Thompson and found in Pathways for a Poet byViola Berg. I have also run into this form at various sites on the internet.

Quick communication sketch,
pick an address, forward, fetch.
Jokes in mass invade my box,
folks send long political talks.
Photos, dogs and kids and chains,
posts still pledging luck or pain,
“Send this on! If not you’ll die”.
Ending ads “A deal, must buy!
Debt reductions cons abuse,
get in touch and read the news.
Friendships lost, renewed once more
mending wounds ignored before.
Now and then a cherished note,
Wow! Its those on which I dote.

Pasted from http://www.poetrymagnumopus.com/index.php?showtopic=1203
My thanks to Judi Van Gorder for years of work on this fine PMO resource. 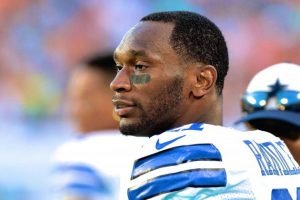 Focus on entitlement-
Joseph Randel’s clear intent
was to steal some underwear
‘cus his contract seemed unfair!
Earning five and eighty K
yearning to put that away
playing foot ball for the ‘Boys
saving bonuses for toys.
Stealthy he must not have been.
Wealthy guy gets more again.
MeUndies found it quite alright —
refund his fine – cure his plight.
Hire him to sell their shorts
Fire him? Hell no, it’s sports.

On Monday, Oct. 13, Dallas Cowboys running back Joseph Randle, 22, was arrested for Class B misdemeanor theft of cologne and underwear at a Dillard’s store in Frisco, Texas. Now, Randle will be a spokesman for one of the brands he stole from. 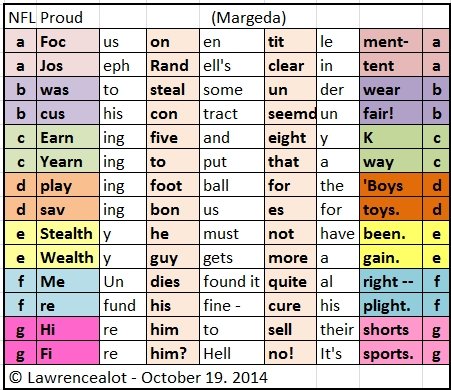 Pasted from http://www.poetrymagnumopus.com/index.php?showtopic=1882#baccresiez
My Thanks to Judi Van Gorder for the wonderful resource at PMO
My example poem
The Sailor and the Rose – 1980        (Duodora)
A round platform
occupied the center
of two acres of
polished hard wood floor.
As a young sailor
from a small town, I was already awed
by the hundreds of couples I suppose.
A round platform
became a stage for a
volunteer to sing
one song with the band.
I was never close
enough to see her. But we stopped dancing
and some (like me) cried as she sang “The Rose.”
© Lawrencealot – March 22, 2014
Visual Template

Invented by Josephine Ann Louise Cortes-Love  aka MajesticRose on AllPoetry, March 2012.
It was inspired by the original Nonet.
TO WRITE IN THIS FORM YOU NEED THE FOLLOWING RULES:
14 lines (2 stanzas, 7 lines each)
First stanza syllable count as follows:  5/7/9/11/13/15/17
Second stanza syllable count as follows:  17/15/13/11/9/5
The last word of each line is the first word of the next line.  (word form)
The first word of the second stanza can either be the last word of the first stanza OR a new word
The poem can rhyme or have no rhyme at all
Example Poem

Dedicated to Majestic Rose
To write a Cortes
Cortes Nonet , I do mean,
Mean minded MajesticRose means that
that requirement that each line carries on so
so smoothly  with the last word from the prior line  if you,
you ambitious poet, think your muse can run free you may lose.
Lose just one word and you will be hitting delete way too many times.
Due to the already significant demands save trying to rhyme.
Rhyme if you wish.  It is allowed I shall attempt it this time.
Time is on my side for I am half way through this verse.
Verse being used here to mean stanza, what’s worse,
worse than that, I’ll run out of couplets-
couplets needed to rhyme more.
More is out the door.
(c) Lawrencealot – June 1, 2012

The Diatelle is a fun, syllable counting form like the etheree with a twist. The syllable structure of the diatelle is as follows: 1/2/3/4/6/8/10/12/10/8/6/4/3/2/1, but unlike an etheree, has a set rhyme pattern of abbcbccaccbcbba. This poetry form may be written on any subject matter and looks best centered, aligned in a diamond shape. (14 lines)
The Diatelle form was created by Bradley Vrooman.

Example Poem
Wind  (Diatelle)
wind
can blow
as you know
with a great might
affecting the tides flow,
cause hurricanes, whirlpools and blight
upon all craft at sea, and sea coasts smite
all inhabitants ashore as if they had sinned.
On the other hand that wind can be quite
kind and let a boy fly his kite
or aid man with the blow,
wind mills save might.
A nice show
is slow
wind.
(c) Lawrencealot – April 2, 2012
Visual Template

The HexSonnetta, created by Andrea Dietrich, consists of two six-line stanzas and a finishing rhyming
couplet with the following set of rules:
Meter: Iambic Trimeter
Rhyme Scheme:  abbaab cddccd ee  (abbabbcddccdee)
Iambic Trimeter means the usual iambic (alternating unstressed/stressed)  meter for every line of the poem, but instead of the ten syllables that comprise a typical sonnet’s iambic pentameter, this particular form uses
six syllables of iambic trimeter per line.
Thus, the name HexSonnetta.
The first part of the form’s name refers to the syllable count per line.
The second part of the name, Sonnetta, is to show this to be a form similar to the sonnet, yet with its shorter lines and different rhyme scheme, it is not the typical sonnet. Not only does this poem have six syllables per line, it also has a set of two six-line stanzas, giving an extra “hex” to the meaning of HexSonnetta.
The rhyme scheme is a bit of a mixture of the two traditional sonnet types, with the two 6-line stanzas having more the rhyme scheme of an Italian sonnet, but with the ending rhyming couplet being the featured rhyme scheme of the English sonnet. The first stanza presents the theme of the poem, with the second stanza serving to change the tone of the poem, to introduce a new aspect of the theme or to give added details.
The final couplet, as in an English sonnet, can be either a summary (if the theme is simple) or it could be the resolution to a problem presented in the theme. In any event, it should nicely tie together the whole piece and could even appear as a nice “twist” presented at the end.
Example Poem
Gam-boy No Batteries

The tramp stamp tattoo’s swell
but now it is passé.
This tat’s for every day.
It’s sure to cast a spell
and start-up jitters, quell.
Just need a pen to play.
You verbal skills may suck.
You may be shy to boot.
The guys will closer scoot.
Keep in your car or truck
a pen for your own luck.
and playing is a hoot!
Put one upon your thighs.
for really studly guys.
© Lawrencealot – May 22, 2012
Visual Template

This form was created by  Alberto Jose Alvarez Gonzalez aka MystiqueWizzard
It is a mixture of  Acrostic, Sonetillo and English Sonnet as it would end with rhyming couplet.
Here´s the twist:
8 syllables : Stanzas 1 -3
7 syllables  :Stanza 2 and couplet
(8/8/8/8/7/7/7/7/8/8/8/8/7/7)
Rhyming Scheme is: abba bccb cddc ee, (abbabccbcddcee)
The closing couplet must conclude what’s stated in the first two stanzas and
the third stanza will be a little change in the direction of the statement( light volta).
You must choose a theme that holds 14 letters so you can make it acrostic.
The theme MUST be a satire or hold an obvious satirical tonality.
Example Poem
Transformation
America, Obama said,
Needs fundamental change– and hope.
That he, a dream black, clean as soap,
Implied would be so free of dread.
Can’t ‘member him saying “Nope,
All thru creating, so much
Prosperity– losing touch
Indeed with the poor man’s need.”
There’s green that needs the Fed’s soft touch.
All businesses need our control
Lest they be soon on public dole.
Imagine! We can be your crutch.
So yep,  I do have small change.
That’s one thing he did arrange.
© Lawrencealot – August 25, 2012
Visual Template

This form was invented by Jennifer L. Hedin, aka on Allpoetry as Pure_Hope
A Four Stanza form, with two quatrains enveloping two tercets.
The syllable counts and rhyme-pattern for each stanza is:
9/8/7/6: abab
7/8/9: cdc
9/8/7: cdc
6/7/8/9: fgfg
(ababcdccdcfgfg)
There is no metric requirement.
Example Poem

“Dress for camping,” I advised, “Wear red.
So she put on a pencil dress.
She wanted me home instead.
Her ploy was a success.
I stayed home and was not sad.
I was I’ll admit, quite content.
Next time I said “Camping won’t be bad.”
“Dress in red.  Wear boots- You will be glad.”
She dressed in leather; time well spent
and wore the best boots she had.
Even though she brought rope,
Figuring to snare our lunch?
I stayed home again.  I’m no dope.
And there I enjoyed my honeybunch.

Created by Shelley A. Cephas
A 14 line poem made up of four tercets and one rhyming couplet.
Meter: iambic tetrameter or iambic pentameter.
Each 3 line verse is an unrhymed triplet, but there is rhyming between the stanzas..
2 rhyme schemes: abcabcabcabcdd  or abccbaabccbadd
Example Poem
Little Brick Library
When I was young,  and that means wee,
My nearby library did astound.
I started stopping every day.
I’d roam the shelves from about  three
’til five o’clock or ’til I’d found
one book I could not put away.
It was wonderful they were free;
the best resource that I had found
and books had so darn much to say.
This was long ‘fore girls intrigued me.
The building was a good friend found,
where I’d rather hang-out than play.
Those short years opened wide the door.
to much I still plan to explore.
(c) Lawrencealot – May 4, 2012
Visual Template