This form was created by Alberto J. Alvarez G. aka MystiqueWizzard of Allpoetry.

Stanzaic: Consisting of four sestets followed by a tercet.
Syllabic: The Sestets 8/7/6/6/7/8 The Tercet 8/8/8
Rhymed: The Sestets abccba The Tercet aaa
Formulaic: Required all or part of the title in lines 1 and 25.
(It need not be a refrain.)
The first two sestets introduce theme and bite into the story.
The other two sestets add climax and spin a volta leading to conclusion.

Poem length: 27 lines
There is no metric requirement.

Before Closing Time (Mystique’s Hexa-verse Rhymer)
At closing time all girls are cute
and many kind of willing.
The night takes on some charm
if she’s upon your arm,
In fact it’s downright thrilling.
What happens next is kind of moot.
But most times guys go home alone
and not for lack of trying.
They act like they’re too cool
and play the patent fool
because of drinks they’re buying
and act too crude, then can’t atone.
The man must set a higher tone;
it surely would behoove him.
Present a charming style
with manners to beguile
she’ll likely not reprove him.
and he’ll not find the evening blown.
So way before she’s beautiful
take time to elevate her.
Enhance the lady’s pride
and then she may decide
that you appreciate her.
and that you have been dutiful.
At closing time all girls are cute.
But when a guy is real astute,
he’ll trade beer glass for champagne flute.
© Lawrencealot – July 16, 2014
Visual Template 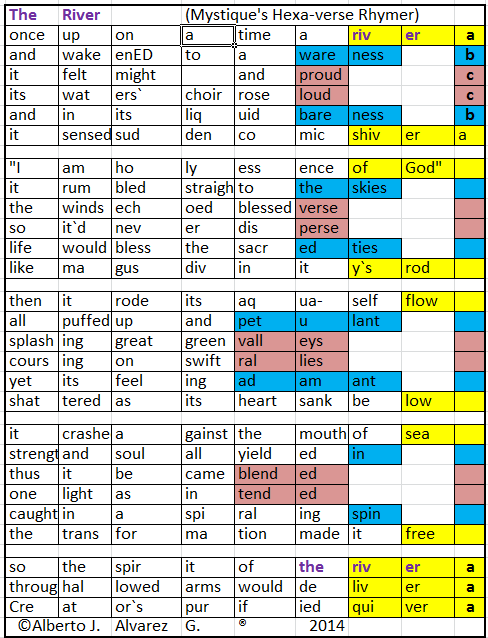 I noticed that there were two gaps in the series of Sestina-like poetry form.  This fills one of those.
Quintina  –
Keyword Requirement
Five line version of the Sestina with end-word enfolding.
Created by Lawrence R. Eberhart
Origin: USA
Schematic
12345
54231
21453
43512
35124
Envoy
12/345
Example poem
Will Google Know? (Quintina)Intelligent devices in each home,
has been a goal for Nest-they’ve led the way
with thermostats that learn their master’s wants
as actions tell them all they need to know.
Now Google bought Nest; you know what that means.
They’ve added sensors to their mining means.
What you like and frequently view they know
already. Photographs along the way
may show your house if any person wants
wants virtual travel on streets to your home.
Where you take pictures, they know by the way,
from cell-phone sensors when you leave your home,
and e-mail topic they already know
No cell or e-mail? This gives other means
to know some more about your daily wants.
They claim that privacy rules but you know
about a camel’s nose and growing wants
and Google tie-ins and just what that means.
The Nest products enhance a modern home,
providing cost-savings along the way.
If unconcerned for any one who wants
that data for less than scrupulous means
and one can spoof their own device at home
and benefit from pets another way
so sensors might not know just what they know.
Are you at home, or have you gone away?
If Google wants to know they’ll have the means.
© January 15, 2014 – Lawrencealot
Visual Template

The Grá Reformata, created by Michael King, is based upon the Villanelle form.
Following the basic setting of the Villanelle, the a Grá Reformata has an extra couplet between each tercet. This couplet can be either rhymed within the structure of the rest of the poem, or in free verse, but always in iambic pentameter.
This is Stanzaic pome of 27 lines, consisting of alternating tercets and couplets, followed by a quatrain.
Meter is Iambic Pentameter
Rhyme Scheme is AbA2 xx abA xx abA2 xx abA xx abA2 abAA2, (AbA2xxabAxxabA2xxabAxxabA2abAA2)
where x is either rhymed or not, and A and A2 are Refrain lines.
Example Poem
Typhoon Flotilla     (Grá Reformata)

The Trijan Refrain, created by Jan Turner, consists of three 9-line stanzas, for a total of 27 lines.
Line 1 is the same in all three stanzas,
although a variation of the form is not to repeat the same line
at the beginning of each stanza.
In other words, the beginning line of each stanza can be different.
The first four syllables of line 5 in each stanza are repeated as the
double-refrain for lines 7 and 8. The Trijan Refrain is a rhyming poem
with a set meter and rhyme scheme as follows:
Rhyme scheme: ababccddc
Meter: 8/6/8/6/8/8/4/4/8
source: shadowpoetry.com
note: on the template below I have colored line 1,
Indicated that in the formal poem it should be first line of each verse.
in the poem below, I followed formal protocol for the first complete Trijan Refrain, then lapsed to the ever more poplular technique of not requiring first line stanza repetion.
Example Poem
(This poem in the strictest sense is NOT a Trijan Refrain, for it violate TWO of the requirements.
It is NOT three stanzas, AND it does not repeat the first line of the first stanza, as the first line
of the other stanza.  It’s failings may make it instructional….)
Crop Circles

Crop Circles are works to amaze.
Sources of awe and hate!
For two score plus, a world-wide craze
to shock and aggravate.
It aggravates the farmers who
lose cash when fields are trampled through.
It aggravates.
It aggravates,
but there’s not much that they can do.

Since I began this poem to write.
This three-D box was made.
Of course it sprang up overnight.
It doesn’t look homemade.
It baffles me what it might mean
laid out so nicely on the green.
It baffles me,
It baffles me.
If it’s a hoax that will be seen.

Mayan themes have been oft addressed.
Celestial cycle lore
hints that earth shall soon be distressed
by changed magnetic core.
We can have help as ancients did,
in building the great pyramid
We can have help,
We can have help.
It could be; that would be splendid.
(c) Lawrencealot – July 6, 2012
Visual Template