This form is derived from the poem Rococo (and another I forget) by Algernon Charles Swinburne. 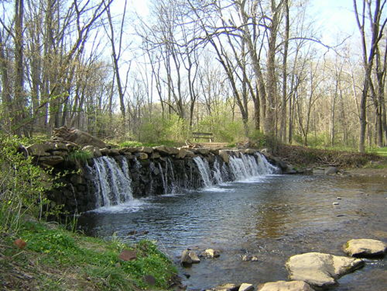 I Went Topless
Then boldness was discovered,
bikini’s came to be!
More skin became uncovered
by girls with spirits free.
Our stream was well secluded
and stood upon our farm,
and thus the girls concluded
we’d play there without harm.
And younger than all others
I had no breasts to hide
But Jane had tits like mother’s
and seemed most satisfied.
While Sally looked most slender
and tied her top on tight
the buxom would engender
in males a keen delight.
We frolicked flaunting boldness
where we were all alone,
enjoyed the water’s coldness
enjoyed what flesh was shown.
I saw more than intended –
that filled my mind with joy,
for of all who attended
I was the only boy.
© Lawrencealot – May 3, 2014
Visual Template

is a verse form patterned after a single stanza in “Ode” by Arthur William Edgar O’Shaughnessy (1844-1881).

Ode by Arthur O’Shaughnessy
WE are the music-makers,
And we are the dreamers of dreams,
Wandering by lone sea-breakers,
And sitting by desolate streams;
World-losers and world-forsakers,
On whom the pale moon gleams:
Yet we are the movers and shakers
Of the world for ever, it seems.
With wonderful deathless ditties
We build up the world’s great cities,
And out of a fabulous story
We fashion an empire’s glory:
One man with a dream, at pleasure,
Shall go forth and conquer a crown;
And three with a new song’s measure
Can trample an empire down.
We, in the ages lying
In the buried past of the earth,
Built Nineveh with our sighing,
And Babel itself with our mirth;
And o’erthrew them with prophesying
To the old of the new world’s worth;
For each age is a dream that is dying,
Or one that is coming to birth.
Pasted from http://www.poetrymagnumopus.com/index.php?showtopic=668
My thanks to Judi Van Gorden for creating the fine resource at PMO.
Sprung rhythm is a poetic rhythm designed to imitate the rhythm of natural speech. It is constructed from feet in which the first syllable is stressed and may be followed by a variable number of unstressed syllables.[1] The British poet Gerard Manley Hopkins claimed to have discovered this previously unnamed poetic rhythm in the natural patterns ofEnglish in folk songs, spoken poetry, Shakespeare, Milton, et al. He used diacritical marks on syllables to indicate which should be drawn out (acute e.g. á ) and which uttered quickly (grave, e.g., è).
Some critics believe he merely coined a name for poems with mixed, irregular feet, like free verse. However, while sprung rhythm allows for an indeterminate number of syllables to a foot, Hopkins was very careful to keep the number of feet he had per line consistent across each individual work, a trait that free verse does not share. Sprung rhythm may be classed as a form of accentual verse, due to its being stress-timed, rather than syllable-timed,[2] and while sprung rhythm did not become a popular literary form, Hopkins’s advocacy did assist in a revival of accentual verse more generally.[3]
Pasted from <http://en.wikipedia.org/wiki/Sprung_rhythm>
For a thoroughly technical treatise on Sprung Rhythm see:
http://www.linguistics.ucla.edu/people/hayes/Papers/HayesAndMooreCantwell2011GerardManleyHopkins.pdf
Note: The Ode presented above does NOT comply with the specifications presented, in that the second stanza has a rhyme pattern of  a a b b a b a b.
My example poem:

In Transit (The O’Shaughnessy)

She made my ride to work a pleasure
Although she dressed in casual clothes
She’d beat the rest by any measure.
When first I thought to speak I froze.
But transit-time provided leisure
and we both used it I suppose
to stoke romance we’ll always treasure
for on this night I shall propose.

The Strambotto has three primary versions:
All are presented here.
The Siciliano,  rhymed abababab
The Tuscano,  rhymed ababccdd (preferred), abababcc,  aabbccdd
and the Romagnuolo, rhymed ababccdd
It is:
Lyrical – Written as one octave, or with the Tuscano, possibly one sestet.  It you wish to write several stanza it becomes an Ottava Rima.
Rhymed – Each with its specific pattern(s).
Isosyllabic – Each line has precisely eleven syllables.
Below are additional resources with history and added information.  At the end you will find my Visual Templates.
________________________________
Strambotto
This was an early form of Italian poetry that was set to music by composers of the frottola and madrigals of the 16th century. The poetry is set into very strict stanzas of eight lines of eleven syllables. This type of stanza is known as rispetto or ottava rima. The musical rispetto was usualy dedicated to a lady love, Aside from the fact the ottava rima had no set form length and later became Iambic it also came from literature and generally had multiple stanzas, but musical version, the strambotto was typically created with a single stanza.
There are three basic types of strambotto and they are identified by their rhyme scheme.
1. Strambotto Siciliano.
2. Strambotto Toscano.
3. Strambotto Romagnuolo
4. Variations to the Strambotto
1. Strambotto Siciliano
It will be noted that this is similar to the Sicilian Octave, but follows the Strombotto rules and consists of eight strict hendecasyllable lines (11 syllables), and similarly for multi stanzas.
a. b. a. b. a. b. a. b.
2. Strambotto Toscano
This form is most used for stand alone poetry, but can be used for multiple stanzas. When writing muliple stanzas (as in a song), it is usual to link each stanza by either a refrain or using the whole or part of the last line of the previous stanza as the first line of the next stanza:
a. b. a. b. a. b. c. c.
3. Strambotto Romagnuolo
This form has the octave constructed from a Sicilian quatrain and a quatrain of two couplets. The same rules apply about stand alone poems, and multiple stanzas.
a. b. a. b. c. c. d. d
Pasted from <http://www.thepoetsgarret.com/2013Challenge/form20.html>
My thanks to the poetsgarret.
The Strambotto is thought to have influenced the development of the Sicilian Octave and the birth of the sonnet. The Strambotto is one of the earliest Italian verse forms and can be found in works from the 12th through the 19th centuries usually set to music. The name comes from the Occitan,estrabot which refers to sentimental and or amorous rhymes. Sources suggest the early Strambotto varied between 6 or 8 lines long however it was eventually recognized as an 8 line form holding fast to a strict 11 syllable line. Rhyme seems to be delineated by territory, Tuscan, Sicilian and Romano. The frame appears to be the same as the Ottavo Rima Stanza. However, the forms are quite different in that the Strombotto is limited to a single lyrical, octave while the Ottavo Rima is a narrative, stanzaic verse written with any number of octaves.
IN ADDITION THE OTTAVO RIMA may be decasyllabic LARRY
The Strambotto is:
Pasted from <http://www.poetrymagnumopus.com/index.php?showtopic=2065>
My thanks to PoetryMagnumOpus
Strambotto (Sicilian)
Pasted from <http://www.poetrybase.info/forms/002/299.shtml>
Strambotto (Tuscan)
Pasted from <http://www.poetrybase.info/forms/003/300.shtml>
My thanks to Poetry Base.
Example Poem
This Drink’s on Me, Err… You (Strambotto)
While I drank sociably, the crowd grew pressing
I’d come because the band was recommended.
Folks were rowdy, unfriendly, rude, depressing.
A girl approached, her lovely hand extended
“May I have your stool to sit next to my sis?”?
“Sure.?” I’d been taught manners are not hit or miss.
Her “sis” rose, gave seat to girl’s male friend (I think.)
When they danced I spilled upon their stools, my drink.
© Lawrencealot – December 12, 2013
VISUAL TEMPLATES. These show the rhyme patterns and syllable count.
No specfic meter is mandated, I have shown both
iambic and trochaic possibilities.