Apparently there are also two frames attributed to the Barzaletta. Sites on the internet describe the Barzelletta with a two part structure. However, two very reputable sources the NPEOPP and Turco’s Book of Forms give examples of an unrhymed couplet structure .
• The “couplet” Barzelletta is:
○ lyrical.
○ stanzaic, written in any number of couplets.
○ metered, often iambic, line length optional although originally octasyllablic.
○ often written employing internal rhyme, end words are usually unrhymed.
○ written with wit and a didactic (instructional) and/or aphoric (concise statement of scientific principal) tone.
○ often follows other stanzaic forms.
Barzelletta by Jan Haag
Look what the cat dragged in by Barbara Hartman
Some say a stitch in time saves nine,
unless you drink wine past its prime.

What’s done is done, the die is cast,
we’ll have a blast with everyone.

Time flies when you are having fun,
we’ve just begun to exercise.

I bit off more than I could chew,
it’s up to you to mop the floor.

All these clichés hold grains of truth
and in my youth were often told.
• The “2 part” Barzelletta is:
○ stanzaic, written 2 to 5 sixains or octaves made up of couplets.
○ metered, often irregular. The line length is optional although originally octasyllabic.
○ written with a ripreso or refrain of 4 lines rhymed abba or abab, which opens the poem and is repeated (often using only 2 of the 4 lines) preceding each stanza.
○ usually written employing internal rhyme, end words are sometimes unrhymed although I have found 2 sources that indicate rhyme scheme cdcdda for a 6 line stanza or cdcddeea for an 8 line stanza. Rhyme does not change from stanza to stanza.
○ written with wit and a didactic (instructional) and/or aphoric (concise statement of scientific principal) tone.
○ composed with a volta at the end of each stanza. (the last line of each stanza links to the refrain).

Side show hawkers call out with ease
to draw the gawkers forth to see
a freak show guaranteed to please
“See two headed frog from Tennessee!”
Naked ladies, young boys agree
who giggle and wiggle in fear
too scared of their moms to draw near,
when dancing in veils are sublime.

Roll of a drum excites the throng
while daredevil diver starts his climb.

Fill your tummy, hot dogs with squeeze
of mustard, cotton candy spree,
ice cream, slurpies and chili cheese
fries all puke up in harmony.
Indulge in summer fantasy
soak up the playful atmosphere
just feast and cheer, let’s chug a beer.
Pay your dime and have a good time.

Pasted from http://www.poetrymagnumopus.com/index.php?showtopic=1154
My thanks to Judi Van Gorder for years of work on this fine PMO resource. 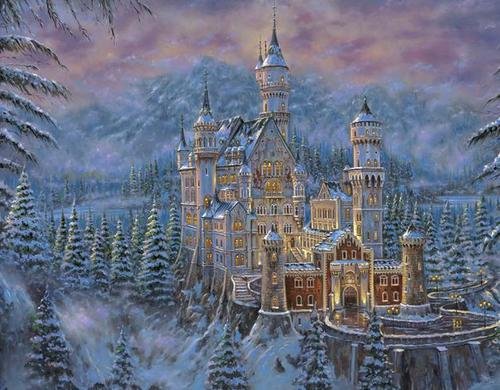 The castle’s known as Neuschawnstein
was spawned by royal fantasy
which shows in it’s playful design
that captures themes of chivalry.
‘Twas built by a King who could not be
and left behind for me and you.

A wondrous castle he’d provide
replacing not just one, but two.

The King’s own monies were consigned
thus to the people it was free.
Though still, Ludwig was much maligned
by ministers who’d disagree.
They called him “mad”; a travesty!
Of Kings like him we’ve had too few.

The Minnesang (Middle High German – minne = love) is the German courtly love poem of the 12th to 14th century. The German equivalent to the Provencal troubadors, the minnesingers were the writers and performers of the Minnesang. The verse was cultivated by the nobility, and often built around the theme of a brave knight’s attempt to court a lady who doesn’t return his favor. This stanzaic form was influenced by the Canzone and other poetic works that these poet-performers picked up in their travels. The Minnesang was meant to be sung but the melodies were not well documented and mostly only lyrics are left.

The defining features of the Minnesang are:
• stanzaic, written in uniform stanzas although the number of lines in the stanza per poem is variable, sixains were popular.
• metric, often iambic tetrameter with the last line of each stanza a longer Germanic line, iambic heptameter or octameter.
• rhymed, variable rhyme schemes were used, ababcc was common another was abbcaa dxd x being unrhymed.

Here is the 1st 2 stanzas of a Minnesang written by Albrecht von Johansdorf and translated into English which I found at a website for Emory College.

I have a tale that I must tell
although I know it’s not unique,
about my love for Abigail
and for her sister Dominique.
I’ve known them both since we were youths;
Our families served the court and catered to the King’s own truths.

l left the castle to engage
in training duty would require;
returned at four-teen years of age.
a well regarded kingdom squire.
I saw both girls then frequently –
their teen-age beauty was extolled. I kissed them secretly.

Quickly beknighted by the King
my prowess so esteemed in games,
my physicality the thing
quite feared by men- admired by dames.
In tournaments I had to choose
whose favors to accept each game and I would never lose.

Oh how I longed for Abigail
but family motives barred our way.
Her father raised most holy hell
when favored on my lance one day.
The King by then had eyes on her
as paramour (how can the man be blamed? It would occur.

Some contact though with her was cleared
I didn’t even have to ask;
the King would use me for his beard
to escort Abby to the masque.
She warmed me when we twirled and bowed
She warned me though she shared my heat, no love could be allowed.

“Please wed my sister, Dominique,
she loves you as I do dear knight,
then for her safety you’d bespeak
when soon our King sends you to fight.”
I loved them both, I have to say
the politics of power in this case worked out okay.

Knittelvers means cudgel verse. Considered simple, sometimes awkward and often satirical, comical or vulgar, Knittelvers are a 15th century German stanzaic form which by the 17th century had become indicative of derogatory statements. Written in crude couplets the genre / form was rejected as clumsy by most reputed poets. But by the 18th century they were revived by such noted poets as Goethe, Schiller and Gottsched. Knittelvers continue to be effective in political satire and parodies.

*stanzaic, written in any number of couplets.

How Many Times? by Judi Van Gorder

He said “sorry, it’s me not you.
I strayed and found somebody new.”
She knew before he spoke his confession
he’d played long before this transgression.

Pasted from <http://www.poetrymagnumopus.com/index.php?showtopic=1076>
My thanks to Judi Van Gorder for years of work on this fine PMO resource

Bad money drives out good they say
The U.S. has both kinds today.
It’s true. I’m now collecting pennies
(pre-eighty-two) when I get any.
The copper content’s worth now twice
the value of their face! How nice.
Until there’s change, (or mass disorder)
I have become a penny hoarder.

Schuttelreim is a German poetic device synonymous with the word play technique of Spoonerisms, named for English educator W.A. Spooner 1844-1930, which is the swapping of the beginning sounds of 2 different words such as big rats/rig bats. The Shuttlereim takes spoonerism a step further and in a rhymed couplet, the initial consonant of the last 2 words of the first line are reversed in the second line. The device is most often used in light verse.

Pasted from http://www.poetrymagnumopus.com/index.php?/topic/1082-schuttelreim/
My thanks to Judi Van Gorder for years of work on this fine PMO resource.

Believe in truest loving trust
Beware the ever thrusting lust.