• Sevenelle is a stanzaic invented form created by Virginia Noble which cannot only be found in “Pathways…” but is also in the Study and Writing of Poetry by Amy Jo Zook and Wauneta Hackleman, 1996.

The Sevenelle is:
○ stanzaic, written in no less than 2 septets, each made up of a rhymed couplet, tercet and couplet in that order.
○ metric, iambic tetrameter.
○ rhymed, aabbbCC ddeeeCC etc.
○ composed with L6&L7 of the first stanza repeated as refrain in the last 2 lines of all subsequent stanzas.

I left the teeming crowds behind
with auto’s smoke so I could find
a healthy place to walk my dog
where one could if he cared to, jog
without the blight of all the smog.
Unhealthy ash from fires ablaze
corrupt Nevada’s autumn days.

But forests burning in the west
has messed my plans, you may have guessed.
My doctor says I must take care,
with particles now in the air
can’t take my puppy anywhere.
Unhealthy ash from fires ablaze
corrupt Nevada’s autumn days.

The Dixon measures the differences between masculine and feminine rhyme. Patterned after the poem The Feathers of the Willow by English poet, Richard Watson Dixon (1833-1900)
The Dixon is:
○ stanzaic, written in any number of sixains made up of 2 tercets.
○ metered, iambic* trimeter
○ rhymed, rhyme scheme aab ccb. The b rhymes are strong, masculine, the rhyme on a stressed end syllable. The a and c rhymes are feminine or falling rhymes, the rhyme is in the stressed syllable of an end word ending in an unstressed syllable.
The Feathers of the Willow by Richard Watson Dixon
THE feathers of the willow
Are half of them grown yellow
———- Above the swelling stream;
And ragged are the bushes,
And rusty now the rushes,
———- And wild the clouded gleam.
The thistle now is older,
His stalk begins to moulder,
———-His head is white as snow;
The branches all are barer,
The linnet’s song is rarer,
———-The robin pipeth now.
Pasted from <http://www.poetrymagnumopus.com/index.php?showtopic=668>
My thanks to Judi Van Gorder for the wonderful PMO resource.
*Added by Lawrencealot
My Example poem.
Unsmudged (The Dixon 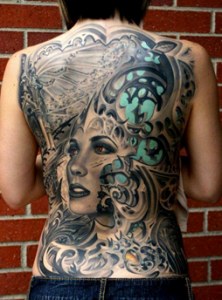 I could not keep from fainting
aa you produced a painting
beneath my fairest skin.
You never have recanted
the claim that it’s enchanted.
A rune that’s blocking sin.
You said no one should see it
It’s awesome, but so be it
It’s there for only you.
Whichever face you’re seeing
it represents my being
and will be always true.
© Lawrencealot – June 19, 2014 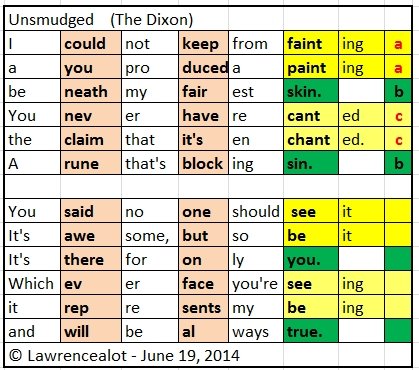 During my first two years on Allpoetry it became obvious that one of, if not the most utilized new form was Jan Turner’s Trijan Refrain. To honor it, and simultaneously give a poet a vehicle for a weightier topic, with more flexibility I created, what I now consider an ill-advised form which in a contest was given the name San Gabriel Refrain. I consider it ill-advised because it has too much flexibility and therefore is fine as a writing exercise, but loses it’s identity as a recognizable form. It has one more line than the venerable TR, the first line need not be repeated in each stanza, and the refrain may be taken from one line and repeated, be multiple refrains taken from any of the longer lines. Later, I amended the specs to allow iambic pentameter, further diluting the form identity.
I am now of the opinion that a new form should be identifiable, and that all deviations from the specific requirements be simply up to the poet’s discretion.
There comes now a newer form created by Allan Emery, aka Joe King on Allpoetry which has a unique identity, with one fewer lines than the TR, but with no stanza limit, or line one repetition requirement.
I have interpreted the specifications as:
It is stanzaic, consisting of any number of septets
It is syllabic: 8/8/8/8/4/4/8
It is rhymed: aabbccb
It requires the first half of L3 to be a repeated refrain as lines 5 and 6
It is metric, writing in iambic tetrameter/dimeter.
I proposed the name of this form to be the Bastard Refrain and ran an Allpoetry contest.  The participation was slight, and some thought it was because the name put off some, so it has been re-christened the Brain Strain Refrain.
My example poem:
Lifted (Brain Strain Refrain)
Her wings are hidden but they’re there
beneath her golden locks of hair
unseen by men who walk this earth,
who note her happiness and mirth.
Unseen by men –
unseen by men
though all of them can see her worth.
Those wings extend to touch my mind
and when our thoughts are so combined
We fly to heights reserved for few.
I’m blessed by being loved by you.
We fly to heights;
We fly to heights
while other people have no clue.
© Lawrencealot – June 3, 2014
Visual Template