Senryu is a Japanese syllabic verse that deals primarily with human nature and is often expressed through humor. It developed in the 18th century and is named after Karai Senryu who was a judge of comic verse contests. They were originally poems of the merchant class and often made fun of corrupt officials and professionals.

The official’s child—
How well he learns to open
and close his fist!
———- —anonymous

The focus of the modern Senryu can be just about anything as long as it has a human or humorous slant. Senryus are lively, often humorous and sometimes even vulgar.

The main characteristics of the Senryu are energy or liveliness in the focus and choice of words, humor as revealed in human nature and use of subjects such as relationships, family, professions, children and pets. It is written in the same frame as the haiku, 17 syllables or less, 2 units of imagary and 1 unit of enlightenment.

So if you are wondering if a 3 line, 17 syllable poem is Haiku or Senryu, you can pretty much place the serious poem in the Haiku column and the more human, humorous poems as the Senryu. (but there are humorous Haiku and serious Senryu, go figure..)

The Senryu is:
• a poem in 3 lines or less.
• syllabic, 17 syllables or less.
• commonly written in 3 lines but can be written in 2 lines and can be written with fewer syllables, never more.
○ L1 5 syllables describes image.
○ L2 7 syllables, adds conflicting image or expands first image
○ L3 5 syllables provides insight (the ah ha! moment)through a juxtaposed image.
• written as a natural human experience in language that is simple, humorous, sometimes bawdy or vulgar.
• presented with an energy or liveliness in the focus and choice of words
• often humorous
• written in the moment.
• an imagist poem (draws the humor from the image)
• untitled but can be #ed.

Some of my own senryu: —Judi Van Gorder

fire ignites within
flame mushrooms to the surface
autumn days

Pasted from http://www.poetrymagnumopus.com/index.php?showtopic=1135
My thanks to Judi Van Gorder for years of work on this fine PMO resource

• Cross Limerick is an American invented form, a variation of the Limerick found in Pathways of a Poet by Viola Berg. It adds a couple of lines to the Limerick verse form.

Pasted from <http://www.poetrymagnumopus.com/index.php?showtopic=1094#cross>
My thanks to Judi Van Gorder for years of work on this fine PMO resource.

The girls who in short skirts walk the street
are not those that mom wants you to meet.
When they’re plying their wares
it’s with commerce in mind
they invite young men’s stares
and more if one’s inclined.
But the kindest of them can’t be beat.

ABBA or Mirror Poem is a rhetorical device that makes use of rhyme in a condensed and unique manner. Although I am sure the device had been used long before, the use of the term ABBA or Mirror Poem was discovered in a book of poetry by the English educator and poet John Caffyn 1987.

Kick in the door,
bite,
fight,
war with a brick.
— jvg

My Thanks to Judi Van Gorder for the fine resource site.

Friend, this is it!
We’ve – I believe
hit the end. 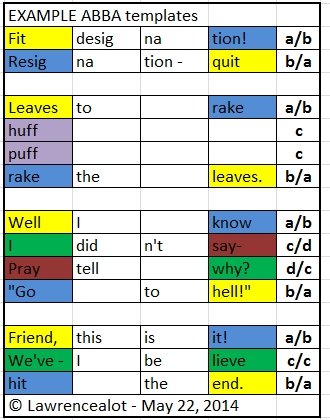 Thanks to Judi Van Gorder for the wonderful resource at PMO.
My Example Poem
(Tanaga)
Casually boys contemplate,
Carefully they cogitate,
what will they appreciate
when they’re searching for a mate?
Will she need to cook and sew?
I suspect the answer’s no.
Will she need to use a wrench,
or speak Mandarin or French?
Need she work with quilting thread,
or perform with brush or pen?
I think I’ll say no again-
if she pleases him in bed.
© Lawrencealot – March 3, 2014
Visual Template
Note: For example only I used one of each rhyme pattern here.