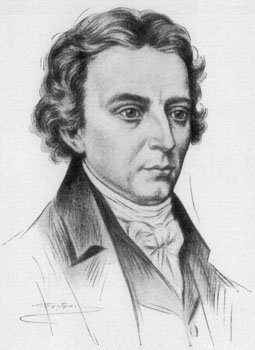 No stir in the air, no stir in the sea,
The ship was still as she could be,
Her sails from heaven received no motion,
Her keel was steady in the ocean.

The Abbot of Aberbrothok
Had placed that bell on the Inchcape Rock;
On a buoy in the storm it floated and swung,
And over the waves its warning rung.

When the Rock was hid by the surge’s swell,
The mariners heard the warning bell;
And then they knew the perilous Rock,
And blest the Abbot of Aberbrothok.

The Sun in heaven was shining gay,
All things were joyful on that day;
The sea-birds scream’d as they wheel’d round,
And there was joyaunce in their sound.

The buoy of the Inchcape Bell was seen
A darker speck on the ocean green;
Sir Ralph the Rover walk’d his deck,
And he fix’d his eye on the darker speck.

He felt the cheering power of spring,
It made his whistle, it made him sing;
His heart was mirthful to excess,
But the Rover’s mirth was wickedness.

His eye was on the Inchcape float;
Quoth he, ‘My men, put out the boat,
And row me to the Inchcape Rock,
And I’ll plague the Abbot of Aberbrothok.’

The boat is lower’d, the boatmen row,
And to the Inchcape Rock they go;
Sir Ralph bent over from the boat,
And he cut the Bell from the Inchcape float.

Down sunk the Bell with a gurgling sound,
The bubbles rose and burst around;
Quoth Sir Ralph, ‘The next who comes to the Rock
Won’t bless the Abbot of Aberbrothok.’

Sir Ralph the Rover sail’d away,
He scour’d the seas for many a day;
And now grown rich with plunder’d store,
He steers his course for Scotland’s shore.

So thick a haze o’erspreads the sky
They cannot see the Sun on high;
The wind hath blown a gale all day,
At evening it hath died away.

On the deck the Rover takes his stand,
So dark it is they see no land.
Quoth Sir Ralph, ‘It will be lighter soon,
For there is the dawn of the rising Moon.’

‘Canst hear,’ said one, ‘the breakers roar?
For methinks we should be near the shore.’
‘Now where we are I cannot tell,
But I wish I could hear the Inchcape Bell.’

They hear no sound, the swell is strong;
Though the wind hath fallen they drift along,
Till the vessel strikes with a shivering shock,?
‘Oh Christ! It is the Inchcape Rock!’

Sir Ralph the Rover tore his hair;
He curst himself in his despair;
The waves rush in on every side,
The ship is sinking beneath the tide.

But even in his dying fear
One dreadful sound could the Rover hear,
A sound as if with the Inchcape Bell,
The Devil below was ringing his knell.